Large-scale, interactive art installations at the Scott Family Amazeum UnGala FUNdraiser bring a unique opportunity for the Northwest Arkansas community to experience the creativity of makers and artists from throughout North America. The 2021 UnGala was no exception. Unlike previous year’s experiences Life Size Mousetrap, and Hand of Man, created by individuals, Impulse represents a collaboration between the arts and sciences, architects and engineers that created an opportunity for collective, interactive play at the perfect time. 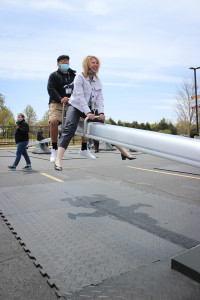 Impulse, a collection of 12 light and sound enabled seesaws, each 30- to 40-feet long started as something else when conceived by Canadian architecture firm Lateral Office, and lighting consulting agency CS Design. After a misinterpreted sketch turned into a “happy accident,” says Lateral Office Founding Partner Lola Sheppard, “the seesaw idea came from our interest in making something that was intuitively interactive and physically engaging. We were interested in the idea of urban play and wanted the experience of each user to be constantly changing.” Each seesaw emits a different sound so the user experience differs depending on the number of seesaws, users and tempo.

“The seesaw idea came from our interest in making something that was intuitively interactive and physically engaging." 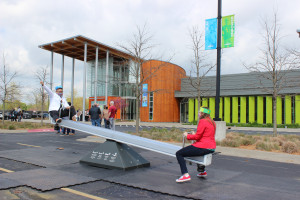 Lateral Office, known for large-scale urban design and landscaping projects, long understood that interactivity in architecture makes for good design by adding in experience to the form versus function debate. “We’ve never been interested in the architecture of buildings or public realm of just form,” Sheppard continues. With the simple form of a seesaw, Lateral Office added complexity not to the form itself, but by requiring interaction to enhance and enrich the experience. While technology provides light and sound, human interaction is required to make it work.

Like most makers, designers, artists, and creatives, Sheppard admits to making things at an early age and wishes she and her partner were more “hands-on tinkerers. We’re good at coming up with the ideas, we’re good at designing them, but we really rely on others who have the technical experience,” Sheppard says. The initial conceptual design work between Lateral Office and CS Design led to collaboration between sound artist Mitchell Akiyama who developed the score and sounds of the seesaws. Bringing concept to reality required mechanical design and fabrication and electronic design along with the input of an engineer and interactivity designer. “We have a long history of making things, but it definitely requires a team to bring these things to life,” Sheppard says. Individual inspiration often sparks the conversation, but collaboration between people with diverse skill sets is integral to the creative process. 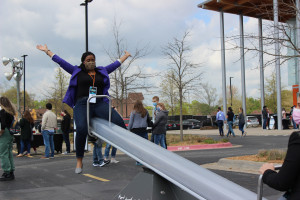 Sheppard admits that they may not have consciously set out to evoke a reaction from people but is pleased with the outcome. “When Impulse was installed in Montreal, which was the first place it showed with all 30 seesaws, there was like this sheer joy. As an architect, people rarely laugh and shout out loud when they enter a building. There were squeals of joy and laughter when people began to experience Impulse,” says Sheppard. Guests of all ages who interacted with Impulse at the Amazeum had the same joyful reaction to the installation. “We had people playing who had never been on a seesaw of any kind right beside someone who remembered riding seesaws in childhood,” says Paul Stolt Amazeum marketing manager. “It didn’t matter if it was a novel or nostalgic experience; the expression of joy was the same.” 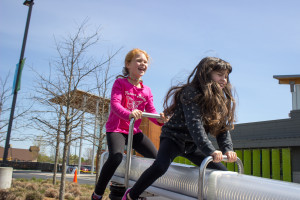 "It was the perfect time for an installation like Impulse. In the midst of a worldwide pandemic, people rarely had the opportunity, or choice, to gather in a public space." says Elyse Partee, Amazeum events and development coordinator. "Impulse provided both opportunity and choice for children and adults to escape reality and replace a year of ups and downs with a few moments of laughter and joy."