Makers are a unique group.

Yet, there seem to be common traits among them, at least among those who have spent time at the Scott Family Amazeum. They are fearlessly creative, passionately curious, largely self-taught, decidedly unique, and determined to bring something original into the world. They also began tinkering at an early age and realized that a hands-on, mind-engaged approach drove them to experiment and innovate. Oh, and they’re just a little bit crazy in the best possible way.

people. He brought his 25-ton, 26-foot long, hydraulic-powered, hand and forearm sculpture called Hand of Man to the Amazeum in April. The experience was incredible for the Amazeum team and the community who saw firsthand what happens when inspiration, perseverance, and a maker mindset intersect.

While studying architecture at Columbia, Christian took a welding class and that sparked a career in creativity and “hydraulically enabled destruction” that continues to this day. He returned to his native San Francisco and worked up the courage to walk into Survival Research Laboratories. “I said I could weld and they put me to work immediately,” Christian says. He began learning the craft of animatronics before taking a job at M5 Industries (yes, that M5 Industries) to work with Mythbusters Jamie Hyneman and Adam Savage before moving to Los Angeles and building animatronics for movies.

Christian admits to being a kid who loved to tinker. He started out building models, but soon found other uses for the parts. “I would pull the motor out and do something else with it, make something else that would move like little dinosaurs out of cardboard and figure out how to make their arms move and stuff. I’ve always had that tinkering spirit,” Christian says. After the welding class, he started doing kinetic sculpture by combining motors and welding. 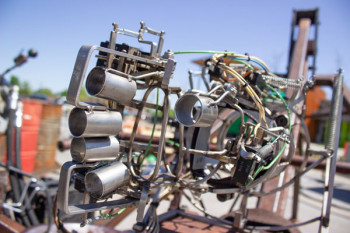 Hand of Man is kinetic sculpture on a grand scale. It’s also interactive in an old-school, analog way. Operating Hand of Man requires practice, but the skills needed to make it pick up and crush a car are innate for many people since childhood when they first picked up and dropped a toy car on the floor. To operate the Hand, the operator places their hand in a glove-type device with switches connected to hydraulic pumps that activate cylinders. When the hand of human moves, Hand of Man moves.

One quickly appreciates the level of engineering and knowledge of physics, fluid dynamics, mathematics, and technology required to create a kinetic sculpture of this size. “I’m totally self-taught,” Christian says. “You need to do your homework; you need to educate yourself about the tools and master the techniques that are required to bring your thing into reality. For most ‘makery-type’ stuff - sculpture, kinetic sculpture, machines, stuff like that - you can’t just live in the digital world. You have to get your hands dirty and learn how to build stuff. Digital tools are amazing and obviously, they’ve revolutionized media and other parts of the world. But there is no substitute for a corporeal experience. You can’t match that with computers.”

For most 'makery-type' stuff - sculpture, kinetic sculpture, machines, stuff like that - you can't live in the digital world. You have to get your hands dirty and learn how to build stuff. - Christian Ristow

Christian never built a prototype or scale model of Hand of Man, he just took the idea and ran with it. His experience building robots and animatronics was the homework he did prior to starting the sculpture. “My first robot was the precursor to the second one, and the third one. . .” he says. “You make mistakes. It’s been said a million times, you can’t be too afraid to make mistakes because that’s where you learn.” In many ways, Hand of Man is a metaphor for innovative thought through the intersection of science, technology, engineering, art and math with curiosity, creativity and a maker 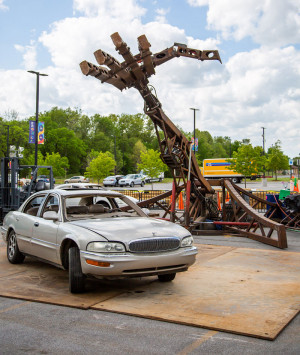 mindset. The result is often something the world has never seen before. Christian says there’s a message here for makers and those who what to be.

It’s ok to come up with something “that sounds ridiculous, impractical or crazy.” Bringing an idea into reality is the essence of self-expression. “It takes courage to do that,” Christian says. Believing in yourself and your idea is part of what the Hand embodies. After that, it takes hard work to make it. “Most of the time, a conversation that starts with 'I want to build a giant hand that picks up and crushes cars' is not going to go any further than the conversation,” Christian says. “But, I didn’t let the idea die at that stage. I did my homework, I put in the hours, I figured out how to build it. That idea that you have that you think is insane, maybe it’s not. Those are the things that inspire other people, the things that bring awe to them and make them want to do something.”

Another common trait of makers is that they are inspirational. They encourage you to try something crazy, but in a calculated way by doing your homework, learning the skills necessary, and believing that you can make something the world has never seen before. When you think about it, most great ideas start with a "crazy" idea.