Building a Creative Community by Making a Mousetrap

The Amazeum hosted Mark Perez, Rose Hardin and their troupe of builder/performers - "fungineers"- as part the Maker in Residence Program funded by the Walton Family Foundation. This program is designed to bring national and regional makers together to support creating experiences at the intersection of science, technology, engineering and art. "The idea behind this is to be able to bring in incredibly creative people to infuse great ideas into the Amazeum and our community," Amazeum Executive Director Sam Dean says.

The Maker in Residence Program builds upon goals established before the Amazeum opened. One goal has always been to bring creative people to Northwest Arkansas to infuse ideas into the Amazeum and the community and connect them with the public. "The public has the opportunity to interface with every maker who participates in the program. We want to use this program to enhance and support the creative potential of our community," Sam concludes.

Mark Perez is a builder, artist, director, fabricator, performer, and, at times, comedian. As the creative force behind Life Size Mousetrap - a gravity powered, 50,000-pound mashup of science, engineering and art - he embodies the maker movement and maker mindset that infuses DIY (Do-It-Yourself) with creative energy to bring ideas into reality. Mark and his "fungineers" introduced Northwest Arkansas not only to an incredible work of moving sculpture, but also to a unique perspective on the creative process. And in the process provided a few important lessons for makers of all ages.

When challenged to build a life-size version of the iconic 1963 Milton Bradley board game Mousetrap, Mark set upon creating the Mousetrap itself along with an experience to go with it. "People said "you're never going to do that,'" Mark recalls. "So we went ahead and started this thing that took a little while to build." Four hundred people showed up to experience the initial performance in 1994. "That was the first version. It was kind of junk, so I threw that out," Mark continues, "and restarted in 1998 and finished in 2005." Lessons one and two of making: the first idea is only the starting point for numerous iterations and enhancements to come, and people are inherently curious about creative experiences.

"When I first started the Mousetrap, my idea was not to just be the guy with the machine," Mark recalls. "I wanted to create anticipation; I wanted to add a little vaudeville, comedy and explanations of all this stuff and let people fully understand and immerse themselves until all of a sudden you're surrounded by a giant game board. Adding a narrative that's educational and fun is important to me. We defeat gravity at every show and use all the simple machines to build complex machines, which in turn make a complicated Rube Goldberg machine," Mark explains. Rube Goldberg, known for his machines designed to complete a relatively simple task with an extreme amount of over complication, has become a key component of simple machines, forces and motion, and physics curriculum in schools throughout the region. 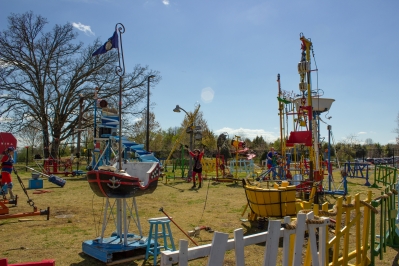 Mark's work as a general contractor restoring Victorian homes in San Francisco helped develop his understanding of science, technology (simple machines are the world's first technological advances), engineering, art and math, and how to apply them. But he admits he's always been interested in how stuff works and continues to learn new things working with other makers in their creative pursuits. "I get calls from artists who want impossible things built because they know what I did seemed impossible," says Mark. His experience as a contractor and artist supports others in their creative pursuits and gets them out of a "can't-be-done" mindset into "coolest-thing-I've-ever-done" mindset. Lesson three of making: creativity doesn't happen in a vacuum. Collaboration among creative people with a variety of skill sets supports the process of making unique experiences.

The Mousetrap is more than just a kinetic sculpture. "Kids love it because it looks like a game; adults love it because they feel like a kid again. Here at the Amazeum, we had people returning over several days." Mark concludes. Many families returned multiple times to experience the Mousetrap. "One of the great things about this location is that it was really fantastic to see parents and children equally engaged and enthusiastic about the show," adds Rose. Most come to see it succeed; others anticipating failure, but all who experienced the Mousetrap left with a better understanding of physics, an appreciation of making as the intersection of science, engineering and art, and a memory of learning as a family.