While relatively new to Northwest Arkansas, the Maker Movement, and its emphasis on building a culture of creativity, do-it-yourself ingenuity, and collaborative inquiry is recognized across the nation as a driver for innovation. Makers, a diverse population of curious creatives with equally diverse skills and talents, set out to change the processes for ideation, invention, and implementation.

Building an understanding about Making and the relationship of Making to innovation and economic growth has been a passion of Amazeum Making and Tinkering Manager Joel Gordon for a number of years. As co-founder of the Innovation Hub in North Little Rock, Joel began supporting a burgeoning Arkansas maker community in October 2013. Shortly thereafter, Joel met Dale Dougherty, creator of Make Magazine who invited him to speak at a conference, which lead to an invitation to the White House and to discuss how making can impact education, workforce development, and the American economy. This meeting led to the Nation of Makers, an organization designed to develop, define and promote making. 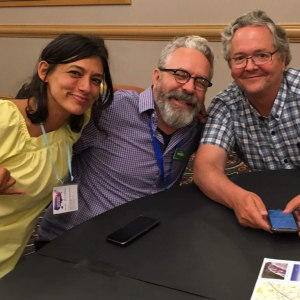 For Joel, making is a fundamental part of the American experience beginning with the first inhabitants of North America (who made everything they needed), through an agrarian economy and the industrial revolution to today’s gig-economy. Making is intrinsically American.

The Nation of Makers is an umbrella group of diverse professionals from STEM fields, government policymakers, and creative makers, like Mythbuster Adam Savage, who work to raise the profile and relevance of making throughout the nation. As a founding member of the Nation of Makers, Joel is an advocate for workforce and business developm

Joel represented the Amazeum at two influential maker events this summer, the Nation of Makers Convention in Chattanooga, TN, and the Capitol Hill Maker Faire and Congressional Maker Caucus in Washington, D.C. He served as a delegate from Arkansas and presenter at the convention. “It’s important for the Amazeum to have representation at these convening events to connect with a national community of makers and build relationships that support constructing and connecting a robust maker ecosystem in Northwest Arkansas,” Sam Dean, Amazeum executive director says. “The Maker Movement is well established on the coasts as a driver of innovation, entrepreneurship, and creative solution finding, and NWA is fertile ground for the Maker Movement to take root.

Chattanooga is one of America’s most startup-friendly cities, largely due to its “Innovation District,” a designated tech-hub where entrepreneurs, tech-savvy innovators, and creatives can collaborate to conceive and implement new ideas. “Chattanooga sees the value of the Maker Movement as a catalyst for business and workforce development,” Joel says. Northwest Arkansas is on a similar trajectory as Chattanooga.

“Bentonville was a hot topic in lots of conversations, everyone was curious to know more about the city and the NWA region,” Joel says. “I had the chance to sit down with Chattanooga Mayor Andy Berke. We talked about the growth of Chattanooga and I did my best to answer his questions about my new home town.”

Bentonville was a hot topic in lots of conversations, everyone was curious to know more about the city and the NWA region. - Joel Gordon

At the Nation of Makers Convention, Joel presented a workshop called “Makers: Their Role in Economic Innovation and Startup Development” centered on economic development, specifically the startup economy. “Many Startup companies fail, in spite of having a great idea or product,” Joel says. “They fail not because of their business strategy, but instead because they can’t get their product manufactured on the scale they need.”

Joel offers the online retailer Etsy as a prime example. According to Ilyssa Meyer, Senior Manager of Public Policy at Etsy, Etsy sellers contributed $5.37 billion to the total economic output in the United States in 2018. “These Makers are your neighbors, your friends, and possibly your family members,” Ilyssa says. “And 86% of them are women!” Currently, there is no policy in place in the United States to encourage these micro-businesses. These Makers are driving a new economy and Joel counts himself among the many supporters. “Makers are the creatives that will drive, not only the economy, but the big ideas of the future,” Joel says.

Joel also represented the Amazeum in Washington, D.C. for the Congressional Maker Caucus and the Capitol Hill Maker Faire. The Caucus is headed up by California Congressman Mark Takano, who, like many Representatives on both sides of the aisle, sees the power of the Maker Movement as a leader in innovation and workforce development. As a maker advocate, Joel focused on opportunities for makers as small business owners and entrepreneurs, as industry workforce, and as creative economic engines. “I was in DC to share the work that the Amazeum is doing to support the Maker Movement in NWA and what NWA is doing to support Makers!” Joel says. 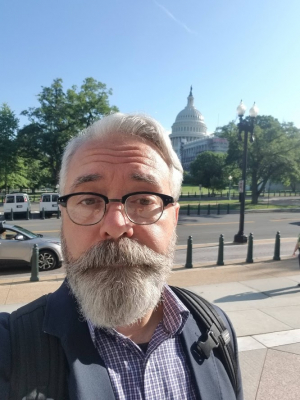 One of the many speakers, Amy Padolf, director of education at the Fairchild Tropical Botanic Garden, resonated with Joel. Her presentation on the Botanic Garden’s cooperative project with NASA, “Growing Beyond Earth,” was inspiring and, “a perfect example of how imaginative minds can come together to create great things,” Joel says. “Elementary students have contributed several ideas that have inspired NASA to develop prototypes that are being tested on the International Space Station,” Joel added that Fairchild is the first botanic garden to develop and open a makerspace.

It’s our job to support the makers and grow their opportunities. It’s also our job to encourage and inspire the next generation of makers. - Joel Gordon

A panel discussion featuring Ilyssa Meyer from Etsy, Keisha Ransome from Made in Baltimore, Kate Mereand from Made in DC, Lawrence Moore from Heavy Paper, and Allen Gutierrez from the U.S. Small Business Administration on makers and their economic impact also provided valuable information. “Made in Baltimore and Made in DC are doing incredible work to empower the Maker Communities in their cities,” Joel says. “They are leveraging their city’s brands and inviting these local artisans to unite and collaborate.” In this way, Joel remarks that the city brand gains value through the makers and the makers gain value through the brand creating a win/win and provides evidence of how collaboration among small business can have an exponential impact on a community.

Connecting with makers outside of Northwest Arkansas offers the Amazeum team a perspective on the work other organizations around the nation are doing to support the Maker Movement that informs the work done here to develop a sustainable, inclusive maker ecosystem that works for Northwest Arkansas. “It’s our job to support the makers and grow their opportunities. It’s also our job to encourage and inspire the next generation of makers,” Joel concludes. The Amazeum continues to expand the museum’s influence beyond its home region by connecting with national organizations focused on creating opportunities for current makers and the next generation of creative innovators.

Are you a maker looking to plug in to with the Northwest Arkansas Maker Ecosystem?

Connect with other makers at monthly Maker Meet Ups or Joel on Twitter @tinkerguy1.