Creative Collaboration, Cranky Contraptions, and the Rise of Mega-automata

Most people who know about automata think about them as small, human-powered contraptions in a box in which gears, cams, levers, and pulleys automate a clever little vignette. At least that was their experience with the Amazeums exhibition of Curious Contraptions created by Cabaret Mechanical Theater in London, England. However, the latest Amazeum Maker in Residence, Ryan Jenkins, thinks automata can be so much more. And bigger, way, way bigger.

Im looking to try some new automata experiments, do some things Ive never done before, Ryan said when he arrived and took up residence in the 3M Tinkering Hub. Clearly, Ryan had come to the right place. Ryan set to work with Joel Gordon, Amazeum making and tinkering manager, and the exhibits team to create a giant automata to help guests better understand how intricate mechanical workings inside an automata make movement possible, and perhaps learn a little physics, computer coding, engineering, artistic expression and computational tinkering in the process.

In an hour, the recycling bin was overflowing with the prototypical refuse created by intense tinkering activities, and the first mechanism emerged ready for testing. Were experimenting with making giant automata and seeing what happens when we take something thats traditionally a small, hand-held box and making it giant, seeing how the materials react, seeing what that process of investigating these motions on a different scale is like, Ryan said. Turning the crank to rotate a 3-foot diameter platform revealed some interesting information about the effect of scale and centrifugal force as items flew off the platform and skittered across the shop floor. 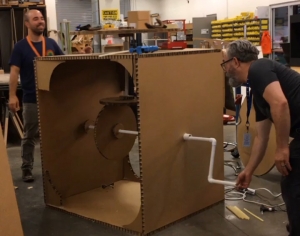 After some STEAM-integrated tinkering, a working prototype was unveiled in the Tinkering Hub and guests began interacting with Mega-automata as they created their own cranky contraptions supported by Ryan and the tinkering team. We always want to be in that cycle of having a deeply immersive experience where we are really deeply engaged as learners ourselves and then reflect on how we can share and involve even more people in that process, said Ryan. As guests created automata, some were added to the prototype making for a collaborative learning experience.

Making and tinkering are ways of understanding the world and expressing yourself through a very playful and collaborative activity, - Ryan Jenkins 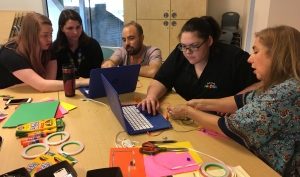 Creating Megautomata turned out to be just the beginning. In a previous visit to the Amazeum earlier in the summer, Ryan lead professional development sessions for Amazeum team to integrate programming, computation and coding using microcontrollers and block-based programming. With some of the computational tinkering experiments, we really focused on figuring out what those intersections are between tinkering and building in the real world with tangible, tactile materials, Ryan said. Then we tried to figure out how to connect those constructions with the things that are programmed on the computer and move more seamlessly between the physical and digital world. By weeks end, Mega-automata was home to a variety of small digitally-enabled automata, making for an interesting juxtaposition between the physical and digital that engendered numerous a-has and wows from guests inside the Tinkering Hub and those peering through the window.

Our pilot Maker in Residence Program is set up to bring artists, engineers, hackers, scientists, educators and DIYers together with our team to learn new skills and test new ideas, said Sam Dean, Amazeum executive director. Ryans time in residence at the Amazeum not only supports this, but also provides our community direct access to some of the most creative minds out there. A strategic goal of the Amazeum is to become a hub for creativity in Northwest Arkansas. Providing opportunities for creative collisions between makers and the community support a growing maker ecosystem and enhance the quality of life. The Maker in Residence Program at the Amazeum is supported by a grant from the Walton Family Foundation.

I think everyone has a tinkering spirit inside them, Ryan said. Humans naturally love figuring things out and manipulating materials. Kids are always testing things out, but grown-ups often have difficulty seeing the value in playful exploration. People continue wanting to do that, but theyre not connected to a community that validates that, Ryan concludes. As the communitys hub for creative, playful exploration, the Amazeum nurtures and validates the tinkering spirit.

Its interesting to note that Ryan quite literally is the embodiment of the tinkering spirit. He began his journey as a tinkerer at the Exploratorium in San Francisco. I was not a science guy, not an engineer. I had no interest in technology. I felt like it wasnt for me, Ryan said. But after being at the Exploratorium and meeting scientists, artists, teachers and people who blurred the boundaries between all those things, I discovered this idea that science and art are really interconnected. Art is a critical component of how experiences in science, technology, engineering and math are developed at the Amazeum in order to create an integrated, connected understanding of the world.

Making and tinkering are ways of understanding the world and expressing yourself through a very playful and collaborative activity, Ryan said. A maker or tinkerer is someone who is not afraid to try things and is ok with taking a tentative idea  something they are unsure if it will work or not  and try it out. Theyre willing to be comfortable not knowing the answers, but being confident that they can figure things out through playing with materials as theyre building something that represents their own ideas.

Big ideas. Ideas that don't fit in a box. You could say makers and tinkers specialize in mega ideas. And sometimes you just have to build a bigger box to test them out.