A number of makers called the Scott Family Amazeum home during the first year of the Maker in Residence Program. Each brought a unique brand of creativity to the museum and community. And each influenced thought about creative work at the museum and beyond. Of all the makers who resided at the Amazeum in 2018, the impact of Fayetteville maker Eugene Sargent continues to radiate through the Amazeum and Northwest Arkansas.

Unlike other participants in the program, whose residency lasted a week or two, Eugene essentially became a permanent resident in the Fabrication Shop for a few days each week working collaboratively with the Amazeum Exhibits team to develop and prototype new experiences for the museum. With his background in art, technology, engineering, and math, Eugene brought a skill set that not only made him a great fit but increased the “what if” potential of those around him.  It wasn’t long before talk of new projects began and the discussion about existing projects ended with “yes, and . . .”

“In many respects, Eugene working with our team prototypes the effect of a large scale Maker Ecosystem,” Amazeum Executive Director Sam Dean said. “The Maker in Residence Program, Eugene’s residence specifically, created a microcosmic maker ecosystem within our Fabrication Shop. We were able to test the idea of how infusing diversely talented creative people into a space that is already home to talented, creative people and necessary tools leads to innovative thought. Eugene was the catalyst that started the reaction. His work not only with our team, but also with the other makers in residence, sparked new levels of creativity and higher-level thinking about what those makers were already doing.” The Maker in Residence Program is supported by a grant from the Walton Family Foundation.

Eugene was the catalyst . . . that sparked new levels of creativity and high-level thinking. - Sam Dean

Eugene established his maker credentials long ago with creative work coming out of his own studio. He saw the residency not as a way to access tools, but a way to access creative people. “I have all the tools in my own studio,” Eugene said. “That’s what a lot of people don’t get about a makerspace. It’s not the tools. It’s people, ideas, cross-pollination, and people getting excited about what you’re doing.” Working at the Amazeum with “creative, smart people” meant there were always opportunities for collaboration in a culture where interesting perspectives are the norm.

That's what a lot of people don't get about a makerspace. It's not the tools. It's people. - Eugene Sargent

Eugene’s background as an artist, engineer, technologist, and builder and his ability to integrate digital technology into practically anything enhanced the experience for Amazeum guests. One of his first projects at the Amazeum revolved around Hot Wheels®: Race to Win™, an exhibit featuring Mattel’s Hot Wheels cars. Eugene made motivators, accelerometers, and a speed trap to ramp up the science and technology as guests worked to engineer extreme tracks for the little cars.

Smashography, a mashup of photography and a baseball bat, started as most great experiments do with:

“what if?” What if a device could record the moment a baseball bat impacts a water balloon, powder-filled plastic egg, or a piece of fruit? Would be Gallaghers lined up for the chance to create some uniquely spontaneous art at the Amazeum UnGala FUNdraiser in April. More importantly, guests were able to see and experience the integration of science, technology, engineering, art and math up close and personally.

Eugene’s residency lit up the imaginations of the Amazeum Team in the Fabrication Shop and Tinkering Hub as they collaborated on projects and amped up their creative power. 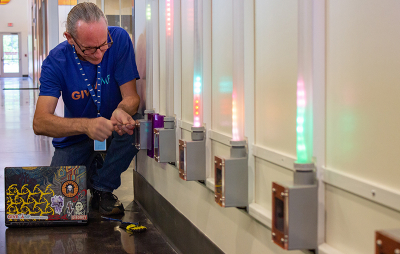 “I wanted to do something fun with NeoPixel LED strips,” Eugene said. NeoPixel LED light strips are programmable to produce motion and different colors. “I had an idea for a bouncing ball, since I’d seen that done before,” Eugene continues. “But for this project, I started from scratch to program the lights to behave as an actual physical system.” While Eugene worked, Erik Smith, Amazeum Exhibits and Facilities Director, saw the potential for an exhibit. A prototype created and tested in the 3M Tinkering Hub proved the viability of the experience. The public debut for Po Glo Sticks happened at Crystal Bridges Light Night. “We immediately noticed that people enjoyed interacting with them visually and physically. We also realized that before Po Glo Sticks could be on permanent display, I’d have to strengthen the frame and shield the wiring,” Eugene said. After some additional work in the shop and input from the Amazeum team, Po Glo Sticks is now on permanent display, making the physical property of gravitational decay of velocity visual for guests at the museum and at events outside the museum since Po Glo Sticks can be transported off site. (Eugene's work on Po Glo Sticks eventually became a project for the Amazeum Creative team and became a public art piece called Rainbow Springs installed at Lawrence Plaza in downtown Bentonville.)

Interactive Sculpture with Mock Back™ Capability

The Amazeum resembles a creative supercollider – a place where the creativity of creative people accelerates and collisions result in innovative, imaginative solutions. When Eugene Sargent and artist Amanda Willshire collided, the result is something the community has never seen, or heard, before. Amanda is a sculptor known for large-scale metal works created out of upcycled materials.  Eugene, also a sculptor known for large-scale work, is the perfect partner to support her latest public art piece the Incredible Electric Technicolor Mockingbird. The artwork was originally envisioned by Amanda as an interactive sculpture that would respond to the public. Eugene’s experience and expertise in electronics and coding made him the perfect collaborator to make this technology a reality.

Integrating the technology to give the Mockingbird the ability accept audio input and enable it to repeat back required not only skills as a technologist and electrical engineer, but also the talent of an 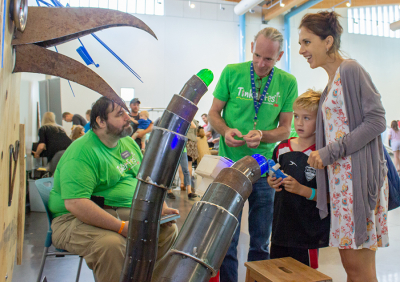 artist. Integrating the necessary technology into the sculpture is no easy task, but the complementary skill sets of the two makers facilitated problem solving. “Amanda and I understand each other,” Eugene said. “I appreciate every detail of what she is doing and could help visualize and incorporate into the design places for the technology and wiring.”

“One of the most exciting things about working with the Amazeum is that I get to explore this interactive world,” Eugene said. “I learned by watching people interact with the Mockingbird prototype at Tinkerfest, especially kids. They’re going to push a button a hundred times before they even know what it does.” As the sculpture takes shape, the lessons learned informed how the final version version of the technology will perform once the Incredible Electric Technicolor Mockingbird is installed outside the Amazeum and a curious public begins to interact with it. “It has to be intuitive,” Eugene concludes.

What is a Maker?

Eugene’s natural state is that of a maker. He studied electrical engineering at Stanford for a couple years, but found his inclination toward art slightly incompatible with the structure of engineering. He worked construction, built his own shop, and operated an art gallery. He writes computer code without formal training in computer science. “I would say that a defining character of a maker is a can-do attitude,” Eugene said. “The Maker Movement is part of a new way of learning. Information is right at your fingertips.” For Eugene, access to information needs only the “most important ingredient” of creative thinking and people are able to find solutions. “You need to be agile and able to combine things in different ways to find solutions when you get stuck – teach yourself things. Making is a new model of learning, which, to me is very exciting,” Eugene said.

The Maker Movement is part of a new way of learning. - Eugene Sargent

“Makers are very open-minded; they love to mix all of the ingredients we have on hand in the modern world – electronics and code, metal and wood – and a fondness for reviving some of the old skills,” Eugene continues. Maker is a very broad spectrum of experience that can be hard to define. “I would say that maker differs from artist in that the work is as much about solution finding as creative expression. For me, a maker is really into being resourceful and solving problems in a cool, creative way.”

A year of makers in residence brought about a year of conscious study of the potential development and impact of a Maker Ecosystem in Northwest Arkansas. Hosting makers from across the United States infused the museum and region with diverse creative thought. The program modeled the impact of an ecosystem and led to deep thinking beyond the definition of maker. “The Amazeum is a creative space where asking questions, exploring ideas, and discovering creative solutions guides our work,” Sam said. "The Maker in Residence Program pushes the boundaries of creativity in human experience." As more makers reside at the Amazeum, the efficacy of a “maker mindset” and maker ecosystem as a driver of innovation continues to be tested and refined.