What binds a creative community together?

At least that worked during the last week of June. Danny Scheible, creator of Tapigami, spent the week as a Maker in Residence at the Scott Family Amazeum as part of the Maker in Residence Program funded by the Walton Family Foundation. Scheible resided in the 3M Tinkering Hub and introduced hundreds of guests to Tapigami, which he calls the art of applying imagination to tape during daily workshops.

Children and adults of all ages participated in Tapigami Workshop during the week. Tapigami Workshop teaches families to work together. The entire idea is that you can sit down and make a piece of art with each other just using tape. Its for anyone in the family to participate in, Scheible said. Creating communal pieces of art makes society very close knit. It gives a sense of accomplishment, builds trust, and allows everyone to be creative, Scheible continued. Throughout the week, multi-generational family groups and individuals lingered in the Tinkering Hub, a roll of masking tape held between their knees, rolling the end between their thumb and index finger creating tape tubes that soon became art.

Some of the art was added to an installation Scheible placed in the museum. Other pieces became part of a new collaborative work that grew in the Tinkering Hub as the week progressed and became a physical manifestation of a creative community. Scheibles augmented installation Tapeopolis will be on display in the Amazeum until after Tinkerfest on Saturday, October 6. 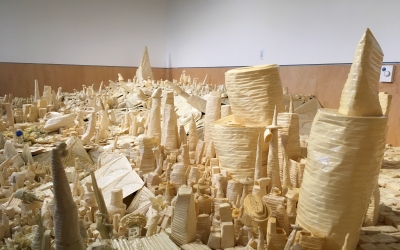 The Tapigami learning curve is rather gradual, and was made even more so by the three simple rules of Tapigami. The first rule of Tapigami is to have fun, Scheible said. Thats the same as the rule of creativity. You dont try to be good at something when youre learning, you try to have fun while you do it, that way youre open to learn more. The second rule is that there is an infinite number of second rules, and [participants] get to make them up together, because its not my art or your art  its our art. And we just dont talk about the third rule, Scheible added.

The whole philosophy behind Tapigami is to get people working together without a defined outcome, and collectively nurture and support each persons innate curiosity and creativity in the process of learning. Tape is the perfect medium for engaging in creativity, Scheible said. No one has ever tried to make something out of tape, so theyve never been judged. Everyones tried to draw before; I would say that 95% have been told they dont know how to draw. Without the preconceived constructs that hinder creativity in traditional art forms, Tapigami opens the door to a safe place to practice creativity while making art. The point of making art is so you can think yourself out of trauma, so you can form social bonds, be creative and refine who you want to be in the world and be open to new ideas, Scheible noted. It allows you to explore something with an open mind instead of try to define it with things you already know. Creating art makes you want to learn.

The idea is to get people to embrace the idea that they can do whatever they want without fear of judgement.

The Maker in Residence Program at the Amazeum brings national and regional Makers to the museum to provide opportunities for community engagement with creativity in various expressions, to collaborate with Amazeum team in developing new experiences in science, technology, engineering, art and math (STEAM), and to develop an understanding of making in Northwest Arkansas. The Program brings incredibly creative people to the Amazeum to infuse great ideas into the museum and the community enhancing the creative potential in the region. Scheible noticed how receptive the community was to him and his unique art form. Everyone was excited to see the tape because its new to people in Northwest Arkansas. It means everything to have a community take the time, effort and energy to engage with my artwork. I made Tapigami to make art as accessible as possible, Scheible said. And during the week of his residency, hundreds of people accessed Tapigami and Scheible. More importantly, everyone who visited the Tinkering Hub and participated left feeling more creative than when they entered.

Scheible said that Tapigami grew along with the Maker Movement, an inclusive movement to support and celebrate the creativity of people not traditionally seen as artists. Makers are artists. Theres no real difference between being an artist and being a maker at this point, Scheible said. According to Scheible, the only difference is that artists have to deal with the cultural minutiae of thousands of years of history, whereas makers can create outside of established cultural constructs on what is and isnt art. Art is the language of consciousness and what allows us to express ourselves and grow our ideas and understanding of the world, Scheible concludes.