Some people outgrow their childhood imagination. Others, like artist Anastasia Ward, never do. She brought her imagination, sense of whimsy and passion for the environment, upcycling and creative repurposing of materials to the Scott Family Amazeum as an Artist/Maker in Residence.

As a child, she imagined her collection of My Little Ponies existing in the real world, traveling to real places, and living real lives, in real houses with real plumbing and electricity. She transformed bookshelves in her home into worlds for her ponies. “There were worlds for everything, like the worlds I always wanted to go – places I read about in books,” Anastasia says. “There was a Hawaii area. I was trying to imagine it for this pony, this thing with four legs, and wondering how it would operate stuff. I was fascinated by thinking about everything that we have, but for something totally different.”

Creativity and curiosity fueled her imagination that continued into adulthood.  Before earning a MFA at the University of Minnesota, Ward worked as an artist specializing in creating her own three-dimensional worlds from mixed media, and created digital media work, all the while imagining what other materials could be used. “I’ve been working with plastic,” says Ward. “Because I was thinking about it as a medium – a clear, really mobile, transportable medium to add to my landscapes – that could be more organic like my creature sculptures.” 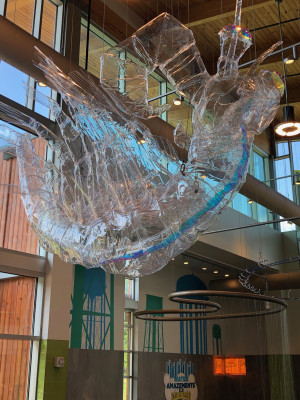 Plastic and organic are two words rarely used together. Ward is determined to transform the perception of plastic as a creative material the way plastic transformed the human experience as a material. Plastic is everywhere and often viewed with distain. Ward imagined plastic not as refuse, but as creative refuge for innovative thinking. “Re-thinking uses of stuff is also a great avenue for the imagination,” says Ward, who ultimately imagined a 16-foot-long Sea Monkey sculpture that hangs in Nature Valley Water Amazement water area. Sammy the Sea Monkey is actually a brine shrimp, but “no one know what that is,” says Ward. “Everyone knows sea monkeys.” Created from similar plastic used in disposable water bottles, Sammy is a metaphor for different ways to adapt and change. “I have no idea how the brine shrimp evolved,” says Ward. “Different ways to adapt and cope and deal with things are based on our resources around us are essential for survival.”

"Re-thinking uses of stuff is also a great avenue for the imagination."

Artists invited to join the Amazeum team as Makers in Residence also interact with the community to share their knowledge and expertise.  Ward, who worked with educators and in informal education settings like Boys and Girls Clubs, YMCAs, YWCAs and Adventure Playgrounds since 2005, believes that it’s important to pass on knowledge. More importantly, she believes imagination connects people of different generations and leads to “Questioning the world around you and coming up with an avenue that’s self-directed. I just want imagination to be supported.” 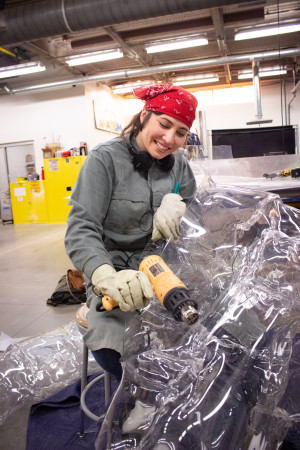 Ward worked in the 3M Tinkering Hub during her time as the Amazeum adding her knowledge of plastics to the fused plastic activities. “I’m so grateful the Amazeum invited me as an Artist/Maker in Residence. Museums and libraries are amazing,” she says, “They are facilitated so that questions continue to be asked.” Ward returns to imagination when talking about making. “Our imagination is what makes us makers. I think that it’s important to value imagination. Valuing making is great because you have to think that everything around you someone imagined and made.”

We value making at the Amazeum. Supporting makers of all ages to activate their imagination to create, innovate, and, most importantly, ask the big, meaty questions about the world around them leads to a passion for science, technology, engineering, art and math. Whether they choose fine art, or fixin’, makers often bring imaginative, creative ideas to the community by thinking differently about the world in which we live, and the one we aspire to live in.