While leading Ice Balloons pop-up on a particularly cold day, Play Facilitator Michelle Ambrose decided to grab some frozen ice from the pond in the Outdoor Playscape. Her idea: add naturally forming ice to incorporate some natural elements, like leaves and dirt, into the experience. Michelle, a life-long proponent of clean water, then thought: “What if we thought of a way to filter water? You know, waterways, getting the trash and gunk out of the water,” she said.

Michelle had been brainstorming ideas for a new environmental engineering pop-up experience for Engineering Week February 18 – 24. This seemed like the idea Michelle was searching for, but in her own words she’s “good at conceptualization” and not necessarily implementation, so she reached out for help from fellow Play Facilitator Nikkie Schmeisser to collaborate.

The partnership between the two resulted in a viable prototype experience in about a week. Nikkie 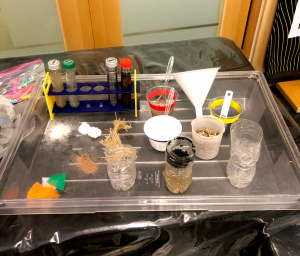 researched the information she needed to build a filter and (like any Amazeum team member) decided to take it a step further in order to make it suitable for both Early Learners (age four and younger) and older guests (age 5 and up).

The actual process of this pop-up was very detailed. It explores four concepts, engineering, aeration, coagulation, and sedimentation. Filtration is actually the fifth step, but that would require a heating element. Something you may not be able to do here at the Amazeum, but you can take that step further at home.

During Build a Filter, guests use a variety of materials like feathers, rocks, cotton balls, and sand combined and pack the mixture into a cut water bottle to experiment and discover an effective combination to help clear the water of impurities. “They can put anything they wanted in it. We actually had activated carbon, which is sort of the secret ingredient in water filters,” Nikkie said. Activated carbon, also called “activated charcoal,” is a form of carbon that is processed to have an incredibly large surface for either absorption or chemical reactions. Water purification is a major use of activated carbon. For the Early Childhood pop-up, they came up with a strainer that children could stick things through and see what would clear through it. That way “they still made a connection,” Nikkie said. 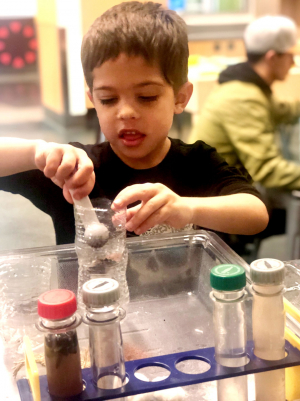 You could almost say Build a Filter was like “pop-up 2.0”, because of its scope and popularity. Most pop-ups are on the exhibit floor for about an hour, but this needed to be kept it out longer due to its popularity. According to Nikkie, “People did not want it to be put up. They would sit there and engage for a long time. The shortest time frame I saw someone end up leaving was after 20 minutes. We would get 8 to 10 people at a time surrounding the table.” “We had two tables and it was still hard for people to get into this pop up,” Michelle added.

Not only did Build a Filter have to be kept out longer than one hour, but it also required two Play Facilitators to support learning at different levels. This also provided an enhanced experience for guests who could easily see the progression and outcomes of those experimenting around them. Michelle compared working Build a Filter with another Play Facilitator to dancing “because the pop-up was so popular, we had all ages at both tables.” They had to work together to facilitate so many “people at various stages of the filtration process. There was no slowdown, there was no breathing room.” She says it was exciting to have that type of challenge. “It’s very hands-on, and you have to be ready to answer questions, and with this pop-up, there were a lot of questions.”

Makes me feel good to know that I can help a child understand that being good at science or engineering is awesome. - Play Facilitator Nikkie Schmeisser

Michelle and Nikkie are excited Earth Day in April to bring Build a Filter back out for guests to experience. They plan to bring the experiment outside on Earth Day to give the experience more context. Both think that Build a Filter will become a guest favorite and make consistent appearances inside and outside the Amazeum.

Earth Day is a big deal to Michelle, who grew up near the ocean where conservation was very influential in her upbringing. “It’s important for us, it’s important for our children. Our children are our future. These kids need to have those seeds planted to better the planet that we have left them,” she said. She hopes it plants that seed of interest that kids might refer back to in school. Nikkie would love if this pop-up helped kids find a passion for STEAM education. “It’s very important for kids to know that STEAM is also something you can have talent in. Those kids can say ’I’m good at this!’ Makes me feel good to know that I can help a child understand that being good at science or engineering is awesome," Nikkie said.