Makers are Everywhere around here

Play Facilitators like Mark Heinen help spark that curiosity in our guests at the Scott Family Amazeum. They work to create those moments of wonder and discovery that are integral to the everyday amazing experiences our guests expect.  You’ll often find Play Facilitators, like Mark, engaging with guests, leading pop-ups or Zinglets, and generally making an experience here at the Amazeum wonderful in every sense of the word.

“The way we lead most of our Pop Ups is by asking questions and seeing what answers kids come up with," said Mark. “If they don’t have the right answers that’s ok because there’s still interest in what’s going on, which might incentivize them look deeper into it and try to figure it out.”

Play Facilitators not only facilitate pops-ups, but they also create them. According to Mark, the Amazeum is “always looking for new things to use on the exhibit floor to keep it interesting, fun, and keep kids learning.”

A little over three months ago, Mark was looking at our Scribble Machines in the 3M Tinkering Hub. Scribble Machines are a guest favorite in the Hub and during our annual Tinkerfest in October. “My idea was to take a Scribble Machine and put it on to the Tectonic table in the Energizer Weather and Nature area,” said Mark.  “I tested it a few times. It was a little successful, it wasn’t perfect.” Where there’s a will, there’s a way, so Mark turned to Making and Tinkering Manager Joel Gordon who suggested turning it into a seismograph and that was the direction I decided to go.” Mark said. 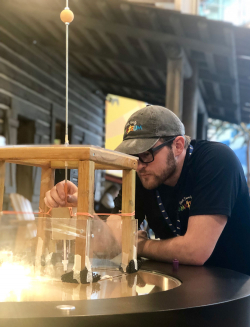 Mark became determined to turn this idea into a reality. “It started with just cardboard and a yogurt cup,” Mark recalled. During the ideation process, Mark turned to not only Gordon, but others on our Tinkering and Exhibits teams. “In building it, I had a lot of help from anybody that I could ask. It’s really just a bunch of different ideas,” Mark said. “I built it, but most of my ideas came from asking questions.” The whole process is a great example of the collaboration between the different teams, and how the unique skills that one-person possesses can bring “amazing experiences” into fruition.

“It started with just cardboard and a yogurt cup.” Mark Heinen

Learning how to 3-D print and figuring out that adding weights to the seismograph can alter the sensitivity of the marker are just a two of the things Mark encountered in this process of investigation, ideation, and iteration. “There’s still a little bit of tweaking to do, but I’ve gotten it to work a few times but it hasn’t been perfect. It’s been through a lot of different stages," Mark added.

He hopes to get all the design and development done before Engineering Week February 18 – 24 so guests can interact with his seismograph.  “It’s still not done. It’s getting there, it’s really, really close,” Mark said. He does plan to use it predominately in the Nature and Weather Exhibit on the Tectonic table. “Right now, the focus is to get it working.” However, as we talked with him, he got another idea for how to share the experience with our guests. “If I got a motor and strapped it to the straw, I wonder if I can make it move outside the tectonic table,” Mark concluded.

At the Amazeum, making and creating are part of what makes every day amazing for guests and team alike.