This year's Tinkerfest could easily have been a multi-day "Tinker Festival" largely due to the quality and quantity of makers in attendance. The Amazeum's Makers in Residence Program provided the impetus for a whole new level of making and tinkering. Five talented, diverse makers from across the country came to Northwest Arkansas to collaborate with our team, interface with guests and the community. Their presence at our 5th Tinkerfest exponentially raised the creativity level at the Amazeum and in the region.

"We're excited this year to have a cohort of Makers in Residence who have been able to come out for Tinkerfest," said Amazeum Executive Director Sam Dean.  "We have artists, engineers and creatives that have been doing deeper dives within our Fabrication shop working on projects to share today and share during the year." The idea behind the Maker in Residence program is to infuse creative talent from across the country into our workspace to try things out, share ideas, help each other, and collaborate with the Amazeum Team to bring new ideas to life. The Amazeum Maker in Residence Program is funded by a grant from the Walton Family Foundation. 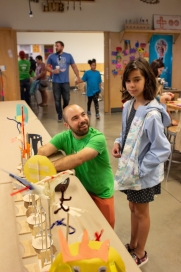 the 3M Tinkering Hub to lead guests in creating automata for a circus-themed collection. Using the Fire the Inventor ensemble automata kit to anchor the workshop, Ryan facilitated the creation of enough automata to fill the Hub. By the end of the day, lions, tigers and clowns bobbed up and down in a Conga line of creativity. Ryan, who has been to numerous maker events across the country, had this to say about Tinkerfest. "I think there's something really important about Tinkerfest," Ryan said. "People can come and really be themselves and show the things they're interested in and bring out their own personality. And then see all these other people who are interested in different things."

Guests at Tinkerfest were able to connect with Denver, Colorado, artist Amanda Willshire, the maker behind Monarchs and Butterflies, and Sassy the Sasquatch sculptures in Bentonville, as they helped prepare blued steel feathers for a new interactive sculpture to be installed early next year. During her week as a  Maker in Residence, Amanda worked with the Amazeum Exhibits Team to build a prototype for the Incredible Electric Technicolor Mockingbird sculpture. She also was able to collaborate with Eugene Sargent, Fayetteville maker and another Maker in Residence, to prototype the hardware and software necessary to add "mock back" capability to the sculpture.

"Eugene's been helping me out with the technology to make the worms pick up people's voices and the bird mock them back," Amanda said. "I feel honored to work with so many knowledgeable people here at the Amazeum, and hope to work with them again." 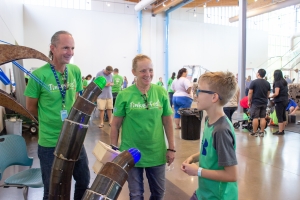 Eugene Sargent is rapidly reaching Maker Emeritus status after his nearly year-long residency at the Amazeum. Along with collaborating with Amanda on the technical capabilities for Mockingbird, he was busy creating a new permanent exhibit for the Amazeum called Bouncing Lights. This exhibit demonstrates visually the decay of a motion wave, or simply looks really cool depending on the movement that activates the bouncing lights. Throughout the day as he tinkered with the computer code that enabled the "mock back" capability he and Amanda fielded questions from amazed guests providing a rare insight into the creative process.

One Maker in Residence who has since taken up permanent residence is Amazeum Making and Tinkering Manager Joel Gordon. Joel's fingerprints are all over the Tinkerfest exhibits of the other Makers in Residence. Ryan Jenkins and Joel prototyped the giant Mega-automata that was the centerpiece of the automata circus that appeared in the Tinkering Hub. Joel's collaboration with both Eugene and Amanda to add functionality to the Mockingbird prototype enabled guests of all ages to interact with the bird and the makers to refine the physical and technological aspects of the design.

Joel's fingerprints are not only on this Tinkerfest, but all those that preceded it. The first Tinkerfest was part of the Museum of Discovery Network. Joel, along with Sam Dean, Iona Bones, Kathleen Lawson, all three with connections to San Francisco's Exploratorium, and some folks from Museum of Discovery conceived of the idea for a community event that brought makers, artists, creatives, and just plain interesting folks together to connect, share, and learn from each other. "We recognized that the Maker Movement was supporting creativity, innovation and learning on the coasts, but it was not established here in Arkansas," Joel said. "Tinkerfest grew out of the need for an event to celebrate creativity and introduce people to the diversity of creative pursuits within the Maker Movement."

Maker in Residence Christa Flores is unlike the others. It's not that she isn't creative, innovative, and 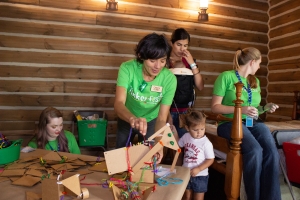 passionate about integrating STEAM into the creative process It's that her background is in education and not as an artist, engineer, technologist or scientist (or a combination of all disciplines). What Christa represents is the diverse nature of the maker movement and people who are part of it. Each brings a unique set of skills and abilities that complement those of the makers they work with. At Tinkerfest, Christa facilitated an activity that she created to support early learners in literally thinking outside of two dimensions. With simple cardboard shapes and yarn and a little imagination, creativity and hands-on interaction, kids began to understand how two dimensions become three. 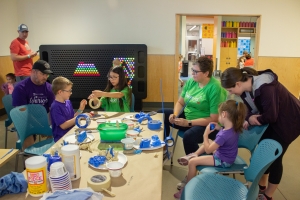 Danny Scheible, whose residency during the summer introduced Northwest Arkansas to Tapigami - "the art of applying imagination to tape" - could not attend Tinkerfest, but his work here influenced the Amazeum Team and community. Tapigami became firmly affixed to Amazeum Tinkering Lead Paige Barajas and Washington Junior High School Teacher Carrie Beach when they learned from Danny during his summer residency in the Tinkering Hub. At Tinkerfest they shared their knowledge and techniques with guests who quickly found Tapigami hard to put down.

While not present, one of the first Makers in Residence and Life Size Mousetrap builder, Mark Perez's impact on the event was evidenced by the addition of a new experience for families - welding. Throughout the day, guests were given the opportunity to fuse metal as they created a collaborative sculpture from scrap metal. Expertly facilitated by the Amazeum Team, children as young as six years old donned protective gear and sent sparks flying. Tinkerfest is likely the only place where families could experience welding first hand.

Tinkerfest is designed around providing families the opportunity to access experiences and people that are largely unavailable in everyday life. It's certainly possible to meet scientists, technologists, engineers, artists, and mathematicians any day, anywhere. But only at Tinkerfest is it probable to play, connect, create and make with any one or all of these people in a single day. At Tinkerfest one sees how creativity and innovation are the connective tissue between all these disciplines.

In many respects, this year's Tinkerfest was a showcase of the impact of the Maker in Residence Program on the Amazeum and Northwest Arkansas.